Wonderfully flaky, faintly buttery, and deliciously tender — these are the words that first come to mind when I think of Popeyes biscuits.

If you’ve ever had them, I’m sure you’ll agree. They’re not as popular as Popeyes chicken, which is frankly a surprise as they’re really good!

In this post, I’ll show you how to make Popeyes biscuits from scratch so you don’t have to go out every time you’re craving for them. It’s one of the easiest recipes in the world, so even young and inexperienced bakers can partake. Plus, preparation doesn’t take any more than 10 minutes. Let’s get started!

It took me a while to find the perfect measurements for this Popeyes buttermilk biscuit recipe, but I’m happy to announce that I’ve finally done it, and I’m super excited to share!

The original Popeyes biscuit recipe is yet to be posted or “leaked” online, so the mentioned ingredients may or may not be the same. Regardless, this recipe tastes so similar to the original that you’d think you’re actually eating from the restaurant.

Best of all, there’s no special “secret” ingredient or overly complicated steps. You probably have everything you need in your pantry already! Let’s begin with the ingredients you’ll need: 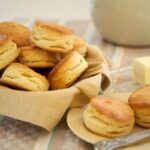 The above recipe is my favourite Popeyes biscuit copycat recipe. However, many of my friends absolutely adore this Popeyes biscuit recipe Bisquick version, so it’s difficult not to share!

Compared to the above, this version has only four major ingredients. You can, of course, increase or decrease the listed measurements according to your taste. 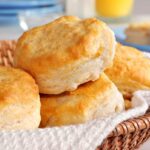 The recipes above are two of the best Popeyes chicken biscuit recipes I’ve tried. Popeyes is quite the drive away from my house, so being able to quickly whip a batch whenever I want is extremely convenient! Do I dare say it tastes better than Popeyes? Yes!

More often than not, real Popeyes biscuits are super dry because they lose their crispness 30 minutes after they’re baked. That’s probably why so many “Eating Popeyes Without Water” challenges on YouTube exist.

The best thing about these homemade biscuit recipes is that you store the dough in the fridge for up to three weeks. This saves you from having to make a batch from scratch whenever you’re craving Popeyes. Happy cooking! 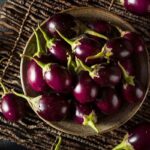