When you season your steel cooking pans, you are making a protective coating over the surface of the . You do this by burning hot oil into the , and I’ll show you how to season carbon steel for proper cooking.

Once you know how to season a carbon steel , you will create a layer of coating that is dry to the touch. Seasoning the doesn’t mean adding flavour to it. It also doesn’t mean that you’re making the food taste better or affecting the flavour in any way.

Why Should You Season Your Carbon Steel ?

The best reason I can give you why you should put a protective layer on your carbon steel and learn how to season carbon steel frying is to ensure that your doesn’t rust. You are helping the to last longer and to work better.

No one wants rust particles in their food, as that affects the flavour and quality of the food. It’s simply not safe to cook with a recipe . So, seasoning your carbon steel is a great way to ensure it lasts for a long time and stays useful and safe for you.

Experienced chefs know that their carbon should be seasoned properly before use. They understand that they have to do the seasoning themselves and not rely on someone else to make sure it gets done. Not every carbon steel you buy is properly prepared and ready to use. You may have to do some tweaking in the form of seasoning the to make it kitchen ready.

How Seasoning the Works

Once you know how to season a carbon steel frying , that works better for you. How does it can get seasoned and how does oil turn into something that’s solid and not something that is wet and greasy?

This happens through heating the oil at a high temperature. When you heat the oil up enough in a steel carbon frying , it turns from a liquid to a very thin solid, dry layer. It becomes what is basically a plastic-like polymer. That layer does a great job of protecting your .

It also gives your a nonstick coating that is better and safer than Teflon. Teflon is known to seep into food as it cooks in pizza but that will not happen when you season your carbon steel frying . Once you know how to season a carbon steel frying , you will boost its performance, allowing it to work better and to be easier to cook with.

How to Season Carbon Steel Fry

Some pans come already seasoned, like cast iron pans. These are actually an iron gray underneath their coating. Once they become properly seasoned, they are covered with a dark layer that gives them their distinctive black look.

You can do that to carbon steel pans, and the first step for how to season or how to re-season carbon steel is to remove any protective coating it already has on it. This coating that already exists is not the same as what you’re going to put on it. That coating helps prevent rust and wear, but it’s not as good as the proper seasoning coating we’re going to put on it.

There are different methods for removing the pre-existing coating on the . The method will vary based on what coating was used. Each manufacturer has their own process for adding a protective coating, and you have to follow the manufacturer’s instructions to remove the coating for that specific .

Once the initial coating is off, you need to dry the thoroughly. You can use paper towels or a dry kitchen towel to do this.

Part of the drying process needs to include heating the on the stove. This makes the remaining moisture evaporate quickly and simply. You can move from this step directly to the next step where you have to heat the to season it. You want to use a high heat for this step to ensure that the oil turns into a dry, solid layer.

You also need to use the right kind of oil. Grapeseed oil, canola oil, or vegetable oil will all work fine. Do not use a buttery oil like lard or actual butter. Make sure you do this step very quickly and do not use a lot of oil. You only need to create a thin layer of oil. To apply the oil, use a dry towel that you can rub into the .

While the is still heating, rub the oil inside and out, all over the . Be sure to cover the completely and don’t miss any spots. Rub vigorously, but you don’t need a lot of oil apply to the . Just a thin layer will work.

How do you know if you use too much oil? If there’s any question that you might have overdone it with the oil, then chances are that you did. This method I’m giving you is the same method for how to season De Buyer carbon steel and most steel pans.

Once you have applied the oil, you need to buff it out. You can use the dry part of the towel or another towel to do that. You want to ensure you buff out all the oil. Don’t worry if it looks like there’s no oil left on the . It’s still there; it’s just formed into a solid layer.

At this point, your should be oiled and buffed completely. You next need to burn the oil into the , creating a solid, semi-permanent layer. You can do this on the stove or in the . How to season carbon steel in ?

Just heat it up to 400 degrees Fahrenheit. Keep in mind however that not all carbon steel pans can handle this level of heat. Be sure to check the manufacturer’s instructions before you put your in the at temperature. You could damage it.

If you’re burning the oil into it on the stove, just heat up your stove to the highest possible temperature. As you heat up the , it will start to smoke, so make sure there’s plenty of ventilation around.

If you have done it properly, the coating you added should turn the a shade of brown. It will take a few minutes to burn the oil into the on the stove and about 30 minutes of cooking the in the to seal the oil in and create a protective layer.

You will probably need to apply the coating a few times going through the same steps I’ve given you up above. What you’re trying to do is create a solid layer all over the that makes the look a dark shade of brown. It should be light brown at first, but after a few applications, your should turn dark brown. At that point, the protective coating should be all over the and should be doing its job. 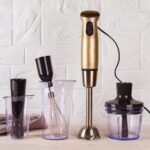