One of the most respected and well-known cooks in the world is Ina Garten, known more widely as Barefoot Contessa. She has her own series of cookbooks, a television show, and a large following online.

People often come to her first as a source of advice for how to make foods they have never tried to cook before for themselves. Ina makes tough dishes look easy with her skilled approach to cooking, using simple recipes and common ingredients to create fantastic foods of all kinds.

One of her signature dishes is zucchini bread, combining the slightly sweet but mild veggie with warm, comforting homemade bread. It’s a dessert bread that is similar to pumpkin bread, apple bread and other sweet breads, if you are not familiar with it.

You will find many people make zucchini bread in the fall, particularly around Thanksgiving time in the United States. Squash, pumpkins, and other similar vegetables are often harvested at that time, so their abundance in this season makes them good choices for incorporating into the foods we all love.

So, you’re looking for a better version that is easier to make or that has a better track record. Ina is careful to only select and publish recipes that she knows will be hits, because she has a national audience on television and for her books. So, you can feel confident making this zucchini bread recipe, knowing that it has been tested and then tested again and that it meets the Barefoot Contessa standard of quality.

Don’t worry too much if you have never made any kind of homemade bread. It is probably not as difficult as you are imagining it. Of course, you will change up how you make the bread if you have a bread machine, but this recipe is for people who are just making everything by hand and using the oven to cook their dough in. 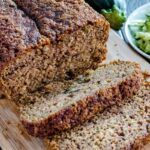 This should be served hot for best results. The bread is sweet and has a cake-like quality to it. You can serve with soft butter spread on it, and the butter melting into the hot bread makes for a wonderful experience. That’s the best way to have zucchini bread, honestly, and that melted butter on hot, homemade zucchini bread is an experience that everyone should have, I think.

You can make some alterations to this Food Network Barefoot Contessa recipe for zucchini bread recipes. If you don’t have zucchini on hand or available, you can use yellow squash. Any mild, slightly sweet squash will do.

The flavour of the squash should be kind of mild so not to overpower or stick out too much in this bread. Use your substitute squash in the same quantities as you would the zucchini. They are interchangeable if they are similar summer squashes, like yellow squash.

You can also add nuts, raisins, dates, or cranberries to your bread. I would recommend chopped walnuts for the best crunch and flavour, but there are several different nuts that might work well in this recipe for zucchini bread.

The soft, squishiness of the cooked zucchini goes great with the crispy, crunchy baked texture of the walnuts. You can add all of those suggested foods into your zucchini bread and make it similar to a fruitcake- cranberries, walnuts, raisins, and dates. Packaging the bread full of goodies makes it even more of a dessert bread, and you might want to forgo the butter since you will already have some added flavours that help enhance the bread.

Solutions for Your Zucchini Bread Problems

Be careful about how much flour you put into the bread and how long you cook it for. Either one can dry out the bread, and adding too much flour can make the bread too dense and lacking flavour. Don’t pack the flour into the measuring cup as you measure it out.

Just sift your flour first and then fill the cup gently as you measure. You want a zucchini bread that isn’t as light as cake but isn’t super dense either. It should be flavourful, sweet, and soft. Cooking it for too long can also make it too hard and crunchy, and you want to avoid that.

One problem that you may run into with zucchini bread is it turning out flat. It would be awful to go through the trouble of mixing the bread together and baking it only for it to come out looking kind of flat instead of puffy and rounded like it should be.

The issue may be with your baking powder. If it is not fresh, that can affect how your bread comes out and how puffy or flat it is. Make sure you are using baking powder that hasn’t been in your cupboard for more than year, and be sure the powder is kept in an airtight container to help it stay fresh.

You could also be using too much baking powder. Measure it out carefully, and if you have problems with the bread not rising like it should, then just slightly decrease the amount of baking powder the next time you make the bread. When you use too much leavening or baking powder, it makes big air bubbles as it bakes. These bump into one another and destroy each other, resulting in a flat-looking, sad-looking bread.

You may be tempted to add more leavening when the bread comes out flat, because you may feel that the lack of leavening made the bread come out that way, but that can actually make the problem worse than it was.

The amount listed in the recipe is accurate, so be careful about how much you use when you try to multiply or modify the recipe at all. Also consider slightly decreasing the baking powder if you run into problems with how flat the bread looks. Your altitude, humidity levels, and your can all affect exactly how much baking powder needs to be used. You may need to adjust accordingly for your subsequent batches of zucchini bread.