Buffalo chicken wings are one of the most popular appetisers in the country, thanks to their incredible flavour, slightly spicy kick, and juiciness. You can find  buffalo wings being served at most football games and any respectable restaurant that serves burgers.

Buffalo wings are a party favourite, and even people who don’t like spicy foods enjoy them because the spiciness is not the main feature. They can be made so many different ways too- barbecued, flaming hot, crispy, or dried.

They are typically baked or fried, but there might be an even better way to make them. What’s that- a way to improve buffalo wings?

Have you ever heard of sous vide? It’s a way to prepare your meat that cook it at allow temperature very slowly. The same idea as slow cooking is used here, and it works really well for buffalo wings. If you make sous vide buffalo wings, you will have juicy, tender, and succulent wings every time.

The slow boiling method uses hot water that cooks the meat thoroughly without drying it out. All the juiciness is still there, and the wings come out plump and hearty. Instead of tough, dry wings like you might get by baking them, you get deliciously tender wings that are just begging to be bitten into.

Sous vide buffalo chicken wings might be my favourite way to make them, but I know this method isn’t for everyone and isn’t right for every time I am making them. Sometimes, you need buffalo wings quickly, and at those times, a slow cooking method will not be possible.

For those other times, however, the souse vide buffalo wings broil method is definitely an option I always consider. 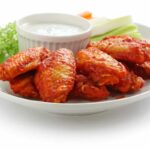 I like to serve my sous vide buffalo turkey wings and buffalo chicken wings with some blue cheese dressing and celery sticks.

The celery adds some colour to the dish and a different texture to play with. The dipping sauce is up to you. Some people prefer ranch sauce or even melted cheese sauce.

Some people are diehard Kenji Lopez-Alt fans and follow him on Serious Eats. If you are looking for Kenji sous vide buffalo wings, he unfortunately didn’t make a recipe for this kind of buffalo wing, but the method I have given you above is the most widely used method for souse vide buffalo wings and similar to what is used that site.

How to Prepare Chicken for Making Chicken Wings

If you have never cut chicken for making buffalo wings, then don’t despair. I’ll show you how to do it and you will see that it isn’t that hard. You can actually save quite a bit of money by purchasing uncut wings and then cutting them yourself.

Once you know how to do this, it is easy to cut them your own and reduce your monthly grocery costs, especially if you are someone who regularly makes buffalo wings.

First you need a flat cutting surface to lay them out on, like a cutting board. Then, just stretch out the chicken wing to its full length. From there, cut the tip off, and then set it aside.

Most buffalo chicken wing recipes do not use the wing tip, so it can be discarded or used as stock. It tends to have little to no meat on it and isn’t very enjoyable to chew though, so it is best left for stock.

You next cut will be between the wing and drumette small chicken leg. You want to separate the two so that you get two chicken wing cuts from each piece of meat. You will get the small drumstick and the wing, and these will be the cuts you will use for the recipe.

How to Make Your Buffalo Chicken Wings Crunchy

If you want an extra crunchy buffalo chicken wing, then you may want to make some slight changes to the recipe. You can bake the chicken after it is done cooking, just baking it for about five minutes on a pan oven that has been preheated to 400 degrees Fahrenheit.

You can also try to make sous vide buffalo chicken wings corn starch, and that simply means that you dust the wings slightly with corn starch before you fry them. This makes for a crispy outer coating and gives them a pleasant crunch when you bite into them.