If you like a little heat, nothing beats a well-made Serrano hot sauce that you can prepare at the comfort of your home. Preparing hot sauce at home gives you total control over the quality of ingredients, and you can increase the heat or decrease it based on your preferences.

You can also make sure that you’re not adding any chemicals or additives that can affect the taste of the sauce. Keep on reading to learn how to prepare the best Serrano hot sauce recipe.

What are Serrano Peppers?

Serrano peppers are native to Mexico and are typically hotter than jalapeño peppers. They also have a stronger and more intense flavour, even when they’re eaten raw or pickled. Because the peppers feel a little fleshy, as compared to other types of pepper, so they can be used to prepare multiple recipes like salsa. You can easily grow Serrano peppers in your backyard.

The peppers look thinner and curvier than the jalapeño peppers and have a fresh, bright kick with a medium-hot spiciness. Serrano peppers are always used for garnish or to prepare hot salsas and sauces. They’re also used in Thai dishes because they’re versatile.

When you first bite a Serrano pepper, you won’t immediately feel the hotness. It takes a few moments before the spiciness kicks in. Once it does, you will realise that the peppers are about 5 times hotter than jalapeño peppers, so they’re not for the faint of heart. They also have an earthy or grassy flavour to them.

How Hot are Serrano Peppers?

The Scoville scale is used to measure how hot the peppers are. According to this scale, Serrano peppers have a rating between 20,000 and 30,000 SHU, or Scoville Heat Units.

A smaller pepper will be hotter than a big one. Green peppers are not as hot as the red ones and can be used if you’re looking for a spicy addition to your dish without having something that is too overpowering or too strong.

Serrano peppers can be easily found in the supermarket. You can touch the peppers and make sure that they’re firm and free of any spots or spores.

In the summer, you will be able to get the best Serrano peppers, and you should pick them based on your preference. If you don’t like your food to be extra spicy, go for the green peppers.

Spicy Serrano pepper hot sauce can be used to add an extra flavor to your dips, soups, stews, or even pizza. Think of it as a versatile spicy sauce that will enhance the flavour of all your recipes if you’re into spicy food.

Before preparing the hot sauce, you should wash your hands thoroughly and wear rubber gloves. If you have any scratches on the skin of your hands, the spicy peppers can be too painful. Gloves will also protect your hands and make clean up easier.

You should wash your hands very well after preparing the Serrano chile hot sauce recipe. This way, you won’t accidentally burn your eyes or nose after preparing your food.

If you have sensitive eyes, you can wear protective goggles. Don’t worry about how you look because your safety comes first. After you’ve taken all these precautions, you can prepare the Serrano chilli hot sauce recipe.

You can also prepare a jalapeño Serrano hot sauce recipe by adding an equal amount of jalapeño peppers. Although the jalapeño peppers aren’t that hot, they will add a unique spicy flavour to your hot sauce. 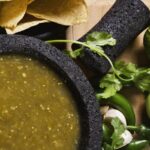 Instead of using fresh Serrano peppers, you can use the fermented ones to enhance the flavour. Fermented peppers add a unique taste to your sauce and enhance the spiciness.

You can prepare fermented Serrano hot peppers using a few ingredients. All you have to do is to fill a jar with Serrano peppers and garlic cloves. Add brine on top and keep the peppers in an air-tight container.

Get an airlock to allow the gases to escape from the jar of the fermented peppers without letting any oxygen in, as it will ruin the fermentation process. Use a fermentation weight to make sure that the peppers are properly fermented.

Once you’ve got fermented Serrano peppers, you can follow the exact same steps to prepare the Serrano hot sauce. This fermented version will have an extra flavour because of the fermented peppers.

Serrano peppers are quite popular in the Mexican and Thai cuisines. You can use fresh or fermented Serrano peppers to prepare a home-made hot sauce that can be served next to multiple dishes. You can mix the peppers with jalapeño peppers if you want your sauce to be exceptional.

While preparing the hot sauce, you should wear gloves to protect your hands from the hot peppers. You should also wash your hand thoroughly after the sauce is prepared. 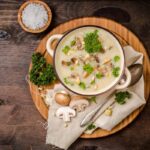 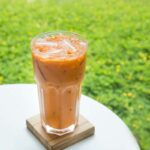