There is nothing like a hearty soup to warm you up in a cold winter’s day. Some soups are meant to be thick and filling, and if that’s the way you like your bean soup, you might be wondering how to thicken bean soup naturally. We have a few suggestions for you that we hope will come in handy, because it can be tricky making a soup thicker.

There is always the concern that messing with the thickness of a soup will alter its flavor. Some of the foods you can use to make the soup thicker will flatten out the taste, rob it of flavor, or change the flavor and texture of the soup. We want to help you avoid some common mistakes and show you how to thicken ham and bean soup or any kind of bean soup you might be making.

How to Thicken Bean Soup Naturally

Our favorite way to make bean soup thicker and not affect the taste or use any manmade ingredients is to use blended beans. You take a can or two of beans and toss them in the blender with some water (or liquid from the cans of beans) and then blend it up. This will make a thick, creamy paste that should be just a little runny. If it’s too thick, just add a bit of water to it.

We love the blended bean method, because it keeps that great bean flavor and yet makes your soup so thick and creamy. It’s the simplest and most practical way to make thin bean soup into thick bean soup, and whenever we get asked how to thicken bean soup, we go straight to this method.

Another method for natural thickening is to add refried beans. This may change the flavor of your beans and may be too thick for the soup, but it’s not a bad option. It will save you from having to blend the beans at all. If you are going for a creamy bean soup, particularly with ham, then adding milk or cream to the refried beans is a good option. This thins them out a little and yet keeps them flavorful. Be sure to mix the refried beans with your liquid thoroughly before adding to the bean soup.

These Methods Change the Flavor

How to thicken up ham and bean soup if you don’t have any beans on hand? We suggest using flour or cornstarch.

Now, both of these methods will diminish your soup’s flavor. The flour can make the soup bland if you use too much of it, but it is a handy thickening agent that most people will have in their kitchen.

The cornstarch isn’t as bad about changing the flavor since you would only need to use small amounts at a time. However, cornstarch can be tough to work with. It’s easy to mess it up and make it lumpy. You may have trouble getting it to dissolve all the way into your soup. A good way to avoid the problem is to mix the cornstarch separately in a small amount of water before adding it to your soup. Make sure it is fully dissolved before adding to your dish that needs thickening.

Have you ever consider using potatoes as a thickening agent? Mashing potatoes and mixing it into a soup or casserole is a handy method that cooks use sometimes, but it won’t work in as many kinds of dishes as flour, milk, cream, or cornstarch.

If you need to know how to thicken up ham and bean soup, we suggest adding mashed potatoes. This works best if you are already using potatoes in the soup, but even without them being a part of the soup already, adding some mashed potatoes doesn’t significantly change the flavor.

For quick mashed potatoes to add to your soup, you can boil slices of potatoes in enough water to cover them and on high heat. Once they are soft enough to poke a fork through easily, you can drain the potatoes and put them in the or in a bowl and use an electric hand . Be sure to add in a little milk so they will blend into creamy mashed potatoes. Then, just add as much as you need to your ham and bean soup.

It is common for ham and bean soup to have potatoes in it, so adding mashed potatoes won’t give you a radically new flavor or something unexpected. It’s a great way to thicken your soup and still keep the traditional flavors and texture.

How to Thicken Bean Soup in Crock Pot

The suggestion we have given you are for soup being made on the stove, in a pot or skillet. You can just add in your liquid or other ingredients while your soup is cooking or after the soup has been made.

Once they are blended, just add the back into the soup and stir them in. Your soup will be pleasantly thick and hearty. You can do this while the crock pot is cooking and you are checking on it to make sure the consistency is right. Just pause the crock pot, blend your beans, and then resume the cooking.

How to Thin Your Soup

What if your soup is too thick? You might think of just adding water, and if you only need a little extra liquid to get the right consistency, then water will be fine. Make sure the water is the right temperature for the soup before adding it.

If you need a lot of liquid because your bean soup has thickened into a paste, you should avoid using water. Instead, use a vegetable or chicken broth, as these thin out the soup while adding some flavor.

The biggest problem with thickening or thinning a soup is how you can affect the flavor. Getting the consistency right is easy, but doing so while retaining the flavorful aspects of the soup is tougher. This is why we suggest rich or tasty ingredients instead of bland ones.

When you are working out how to thicken black bean soup or ham and bean soup, you may make it too thick. Knowing how to thin it out a bit with the right liquid is crucial to getting the right consistency. It’s easy to add too much blended beans or mashed potatoes to your soup, making for something that doesn’t seem very soupy. Adding in just a touch of broth or stock will help to get the consistency back where it is supposed to be.

What Goes Good with Bean Soup?

Once you know how to thicken bean soup and you have it just the way you want it, you can make this dish with confidence. What goes well with bean soup, though? We think some toasty bread makes for a good side dish, as do crackers, pasta and salads. If you are making black bean soup, consider pairing it with corn chips or enchiladas for a southwestern style meal. For ham and bean soup, consider pairing it with biscuits, green beans, or another Southern staple. 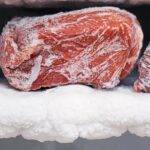 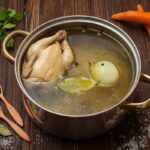