A couple of decades ago, the friendly Scots had graciously gifted us the scotch broth soup. It’s indeed a soup to warm your heart, fill your tummy, and infuse your body with nutrients.

What is its preparation time? On average, a bit over two hours. What about cooking time? It’ll take you only from one to two hours, and you’ll enjoy yourself and the family from six to eight serves.

So, how to prepare this scotch broth soup? Let’s find out!

In order not to upset the Scots, let’s begin with the traditional recipe: the one that’s made with lamb, and that’s cooked on a slow cooker.

The following recipe is best made using a slow cooker. If you don’t have one, the stovetop can substitute for that. However, if you’re going to use the stovetop, you’ll have to let the beans soak for at least 5 hours. By the way, beans are one of the key ingredients of the broth, and we’ll get to the rest in a second.

Preferably, you should let the beans soak overnight. On the other hand, if it’s the recommended slow cooker you’re using, you can just throw the beans in and start cooking. 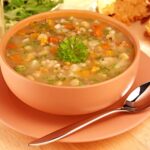 Now let’s see the scotch broth soup recipe using chicken. You can make this one without a slow cooker. So, you’ll probably need to just leave it the whole day, checking on it from time to time. Optimally, you’ll also need to let your beans soak overnight.

How to Optimally Soak Your Beans?

The night before your cooking day, wash your beans along with your pulses. Place 2 cups of the beans-pulses mixture along with a half cup of pot barley. Wash the mixture thoroughly, then add water until the mixture doubles in its height.

The next day, you’ll notice how puffed your beans and the rest of the mixture components are. That effect is thanks to the soaking up of the water. 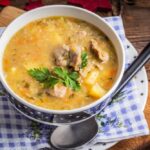 This recipe is like wine; it gets better with time. If you leave the dish and eat it the next day, it’ll taste even better!

For all of you vegetarians out there, we’ve got you covered. This delicious meal doesn’t have to include meat at all. The key ingredient can be a broth vegetable mix, which is readily available at big supermarkets.

This mix usually includes pearly barley, blue peas, green and red lentils, and dries veggies. You’ll also have to add in some more fresh vegetables for a perfect plate. 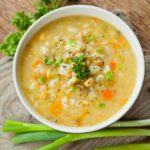 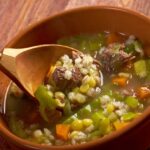